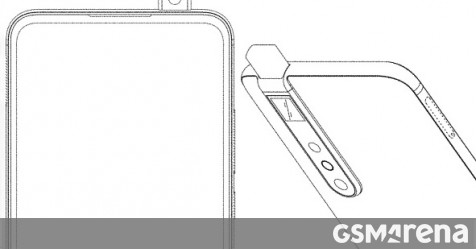 Xiaomi explores various designs (as we have seen,in the,past), and while the latest patent it was granted isn’t the most exciting of them it’s one we can expect to see in a phone much sooner.

Xiaomi Files New Pop-Up Mobile Patent. I Think This One Will Launch Around 15-17K. pic.twitter.com/Sy4127AkPQ

The patent was initially filed in August of 2018, when the pop-up hype was at its heights. Now pop up phones have dwindled in numbers as the much simpler from an engineering perspective punch hole is becoming the norm. Also some OEMs have complained that pop-up cameras make it harder to achieve water protection. So there is a chance that the project might have been scrapped altogether.

If it does come to be we have plenty of angles from this patent, so we can get a really good idea what this phone would look like. Theres a USB-C port at the bottom and some speaker grilles in very obvious places.

There isnt a headphone jack, though, which might indicate this would have been meant as a flagship phone. The position and appearance of the top-most camera leads us to believe this is a periscope zoom setup with two auxiliary cameras, probably ultrawide and depth sensors.