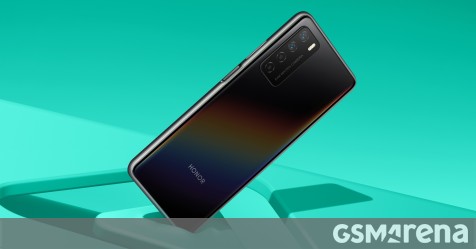 Honor is cooking-up another pair of devices for its Play lineup. Heading towards a June 3 announcement, the Honor Play 4 and Honor Play 4 Pro should not be confused with the Play 4T and Play 4T Pro. A different pair of Honor devices, that recently appeared out of the blue and are already official.

A company manager took to Weibo today to showcase banners for the Honor Play 4 in three colors. Officially, thats about as much as we know about the Honor Play 4 pair at the moment. Unofficially, a recent TENAA listing suggests the regular Honor Play 4 will sport a 6.81-inch, 1080 x 2400 pixel LCD display, 4,200 mAh battery and a plethora of RAM and storage configurations – 4GB, 6GB, and 8GB RAM options with either 64GB, 128GB or 256GB storage sizes. Also, a quad main camera setup, consisting of a 64MP main camera, an 8MP secondary camera, and two additional 2MP sensors, perhaps one macro and one depth sensor and a 16MP selfie shooter in a punch-hole cut out on the front. All of this, fitted inside a 170 x 78.5 x 8.9mm, 213-gram body.

Chipset is still a bit of a mystery, but we do know it should be an octa-core, with a reported clock of 2.0 GHz, making MediaTek Dimensity 800 a viable candidate. As for the Honor Play 4 Pro, we already have a pretty detailed leak, complete with renders. It is expected to offer 5G support, likely through the use of a Kirin 820 chipset. A connectivity option that is not quite as certain on the vanilla Play 4. Other bits and pieces expected on the Play 4 Pro include a Sony IMX600y sensor for its main camera, 40W fast charging and a 3.5mm audio jack.