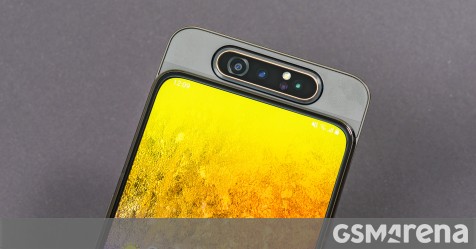 Samsung rolled out Android 10 with One UI 2.0 for two smartphones this month – Galaxy M40 and Galaxy A70s. That number now increases to five since the Korean conglomerate is rolling Android 10 for three more smartphones – Galaxy A6 (2018), Galaxy A7 (2018), and Galaxy A80.

The Android 10 update for the Galaxy A7 (2018) sports version number A750FXXU4CTBC and weighs around 1.3GB in size. It brings in Dark Mode, new navigation gestures and new UI, along with other Android 10 and One UI 2.0 niceties.

The new firmware also bumps up the Android security patch level on the smartphone to March 1, 2020.

The Galaxy A6 (2018) gets Android 10 with build number A600FNXXU5CTB9 and March 2020 Android security patch. A detailed changelog is currently unavailable, but it should bring in the usual Android 10 and One UI 2.0 goodies to the Exynos 7870-powered smartphone.

Talking about the Galaxy A80, it gets the latest version of Android with One UI 2.0 and firmware version A805FXXU4BTC3. The new build comes with Dark Mode, new navigation gestures, new UI and Digital Wellbeing, but it doesn’t include the screen recording feature which was a part of One UI 2.0 for Samsung’s other high-end smartphones.

Besides, the build comes with the older February 2020 Android security patch instead of the latest one.

You should get an update prompt on your device in a few days, but if you can’t wait for it to pop up on your unit, you can check for it manually by heading to the Settings > Software update menu.