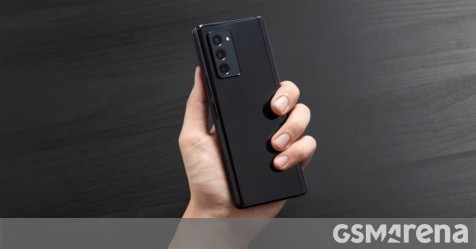 Samsung has sort of semi-announced the Galaxy Z Fold2 at its big Unpacked event on August 5, with the company promising a proper unveiling, with all details, to come on September 1. We got a few official press renders of the upcoming device, but sometimes nothing beats an honest-to-God hands-on video.

And today that’s exactly what has surfaced, courtesy of Ben Geskin on Twitter. It’s a short 16-second affair, but does portray more angles of the device than the official images. You can see the weird placement of the internal hole-punch selfie camera, the display crease (which is obviously not going to be featured in promotional materials), the much improved external screen (in size and bezel size), and the rear, reminiscent of the Galaxy Note20 Ultra, because of the similar looking camera island.

The Galaxy Z Fold2 has a 6.23-inch cover display and a 7.6″ internal screen (which has 120Hz refresh rate too), and according to rumors it should be powered by the Snapdragon 865+ chipset. It will run Android 10 with One UI on top, of course.

The rumors also talked about a wide/ultrawide/telephoto triple rear camera setup, a 4,500 mAh battery, and 12GB of RAM and 256GB of storage (possibly UFS 3.1).