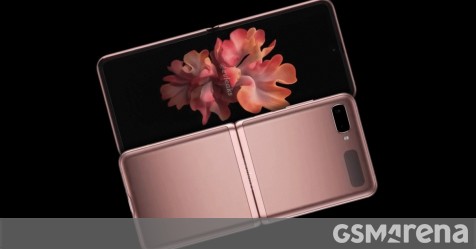 Official-looking images of the Samsung Galaxy Z Flip 5G leaked last week and now we are looking at a video shared by leakster Evan Blass that shows off the Mystic Bronze variant of the foldable smartphone from multiple angles. You can check it out below.

The clip doesn’t include any specs of the Galaxy Z Flip 5G but thanks to TENAA we know the smartphone won’t come with any major changes, except the chipset. This was corroborated by XDA‘s Max Weinbach who said the biggest difference between the 4G and 5G versions of the Galaxy Z Flip is the SoC – the former came with Snapdragon 855+ while the latter will arrive with the freshly announced Snapdragon 865+.

According to TENAA the Galaxy Z Flip 5G will pack a dual camera setup on the outside comprising one 12MP and one 10MP unit as opposed to the 12MP+12MP combo on its 4G counterpart, but citing publicly available information, Weinbach claims the 5G model will also pack two 12MP cameras on the outside but there’s a chance Samsung might be cropping the secondary 12MP sensor to 10MP.

So for the Z Flip 5G, the ONLY part that changes is the SoC. It’s the Snapdragon 865+. The cameras stay the same at 12MP and 12MP. Same sensors too. Display is the same. Software is One UI 2.5 which is mostly unchanged. Hole is the same size. Battery is the same size.

Weinbach further claims that Galaxy Z Flip 5G will be 0.5mm thicker and 0.1mm taller than the 4G model.

The Samsung Galaxy Z Flip 5G is expected to arrive on August 5 alongside the Galaxy Note20 series.