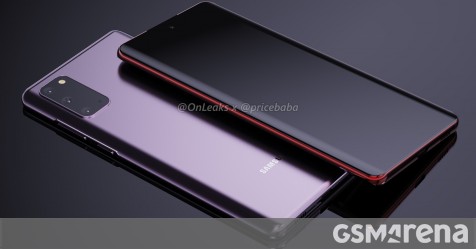 An image of the Samsung Galaxy S20 Fan Edition (or S20 FE for short) leaked earlier this month and it suggested that the phone will have a flat screen. The dynamic duo of @OnLeaks and Pricebaba released CAD-based renders that confirm this and give us a more detailed view of the phone.

Interestingly, the screen size is between 6.4 and 6.5 inches, meaning it falls between the Galaxy S20 (6.2”) and the S20+ (6.7”). The selfie camera is in a centered punch hole, matching the rest of Samsung’s upscale lineup.

However, because of the bezels around the screen, the Fan Edition ends up almost exactly the same size as the S20+ and measures 161 x 73 x 8 mm. It has the same battery capacity as the plus too, 4,500 mAh.

The leaksters suggest that the phone’s frame is made out of metal while the back is matte plastic (similar to the vanilla Galaxy Note20).

The phone appeared on Geekbench with an Exynos 990 chipset instead of the rumored Snapdragon 865. According to Ice Universe, the Galaxy S20 FE will have a 120 Hz screen and an IP68 water resistance, just like the main S20 trio. The camera department will use the 12 MP main and ultra wide cams of the S20/S20+ but will switch it up with an 8 MP 3x telephoto camera (so say previous rumors).

Additional information from Korean publication The Elec suggests that the Fan Edition will be released in October at a price of KRW 900,000 ($760/€640) – a significant discount from the even the small S20, which goes for just over KRW 120,000 (for the 5G variant, the 4G one isn’t available in Korea).