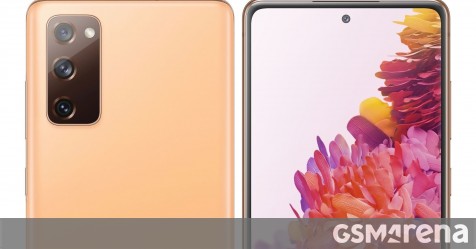 Earlier this month, we got our first look at the Samsung Galaxy S20 Fan Edition, and the CAD renders that leaked yesterday showed off the smartphone from multiple angles. Today, we are looking at a new set of renders leaked by reliable leakster Evan Blass, that show the Galaxy S20 Fan Edition in six colors. You can check out the images below.

These renders corroborate yesterday’s leak. The S20 Fan Edition packs a punch hole display, which is rumored to have a FullHD+ resolution and 120Hz refresh rate, with a diagonal between 6.4 and 6.5 inches.

Around the back, we have a triple camera setup aligned vertically in the top-left corner, which is said to be a combination of a 12MP primary, 12MP ultrawide and 8MP telephoto units.

The S20 Fan Edition has the power button and volume rocker on the right side, with the USB-C port placed at the bottom. The smartphone was initially rumored to have a Snapdragon 865 SoC at the helm, but it was recently spotted on Geekbench with an Exynos 990 chipset.

Other rumored specs of the Galaxy S20 Fan Edition include IP68 dust and water resistance and a 4,500 mAh battery. The smartphone will be available in both 4G and 5G versions and will reportedly arrive in October with a price tag of KRW900,000 ($760/€640).