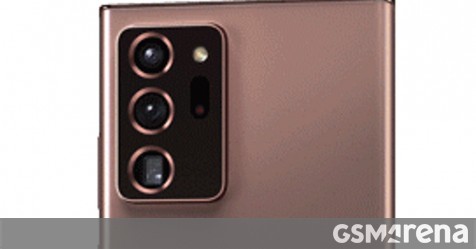 Earlier today, Samsung confirmed that will be announcing 5 new devices at its Unpacked event on August 5. Now, thanks to @evleaks latest reveal, we get a close look at the Samsung Galaxy Note20 Ultra (not that we haven’t already seen it) in a 360-degree image. The GIF shows the alleged Note smartphone in the leaked color allegedly called “Mystic Bronze”.

In the run-around view, we can see that the very edges of the display are slightly curved. It looks like Samsung did this to keep the bezels super thin on the sides. The display appears to still be as flat as Samsung made the Galaxy S20 lineup.

The Samsung Galaxy Note20 Ultra will have triple main cameras, consisting of a 108MP main camera, a periscope zoom camera, and an ultra-wide camera as well. The periscope camera is the one expected to remain exclusive to the Ultra variant.

In addition to the Galaxy Note20 lineup, Samsung is going to announce the Galaxy Z Fold 2, Galaxy Z Flip 5G, Galaxy Tab S7 (and S7+), Galaxy Watch 3, and the Galaxy Buds Live. The event kicks off on August 5 in the company’s Unpacked livestream event.