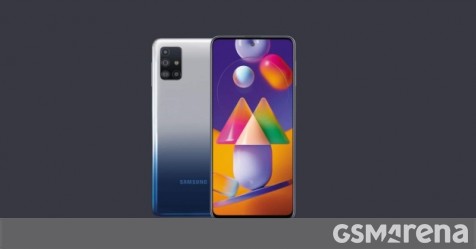 The successor to the Samsung Galaxy M31 is coming on July 30. Samsung just confirmed the big launch for the Galaxy M31s and teased the device’s key features through its Amazon landing page.

Starting with the display we can see an Infinity-O display with a centered punch hole – a first in the Galaxy M series. The panel itself will be an sAMOLED one with FHD+ resolution but there’s no word on the exact screen diagonal for now. The back will house an L-shaped quad-camera setup with a 64MP primary camera with the company’s Single Take function which allows users to take multiple photos and videos simultaneously.

As with the M31, the key selling point of the M31s will be its 6,000 mAh battery. This time around Samsung will offer 25W fast wired charging as well as reverse charging which will likely require a USB cable, effectively turning the phone into a power bank. The image of the phone’s back also reveals it will not come with a rear fingerprint scanner which could imply an in-display scanner this time around.