Realme X3 and X3 SuperZoom launching in India on June 25, Buds Q may tag along 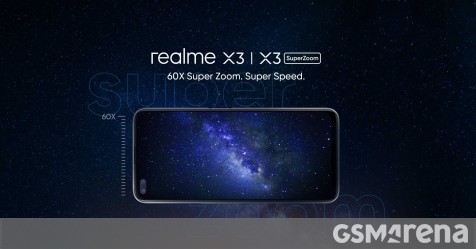 Yesterday Realme teased the Realme X3 and today the company announced it will unveil it in India on June 25. Alongside that, Realme will also launch the X3 SuperZoom in the country which was unveiled last month.

#TheXIsHere with a super camera built to capture the stars & a starry mode available for the first time on a #realme smartphone with 4th generation of Super Nightscape!#60XSuperZoomSuperSpeed
Launching #realmeX3 & #realmeX3SuperZoom on 25th June, 12:30 PMhttps://t.co/v7Xkm8HALx pic.twitter.com/QfhHwgxyWT

Realme hasn’t divulged anything about the regular X3 yet, but it’s rumored to have the Snapdragon 855+ SoC at the helm – the same chipset that powers the X3 SuperZoom. You can read our in-depth written review of the Realme X3 SuperZoom to learn more about it or watch the video attached below about its key features.

Alongside the X3 duo, Realme may launch the Buds Q TWS earphones in India on June 25. The company hasn’t officially confirmed it yet, but Realme’s Indian CEO Madhav Sheth in the latest episode of #AskMadhav on YouTube revealed (at 9:28 mark) the TWS earphones will be priced less than INR2,000 ($26/23) in India, competing directly with the Redmi Earbuds S priced at INR1,799 ($24/21).

Additionally, Sheth revealed that the company is working on “flagship-level TWS” but didn’t divulge anything about it. You can watch the entire episode of #AskMadhav below.