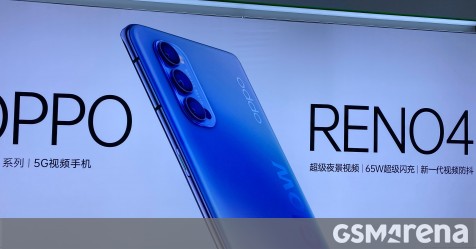 Oppo has launched over a dozen smartphones under its Reno series and it appears the company will soon add a new member to the lineup, dubbed Reno4.

A couple of images have leaked on Chinese social network Weibo, which reveal the design and a few specs of the Oppo Reno4.

The Reno4 will arrive in at least two colors and sport a quad camera setup on the back which will come with the Ultra Steady feature. The back also has the Oppo logo on the right side of the cameras, below which is a huge text that reads “Glow”. This might be the marketing name of the phone’s color, but we’ll have to wait for more information to be certain. 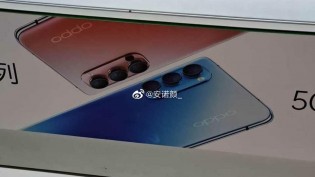 The picture also reveals that Reno4 will support 5G networks and 65W fast charging. It will come with a Super Night Scene Video feature (machine translated from Chinese), which sounds like a Night Mode for video recording.

The leaked images don’t reveal the front side of the Reno4, so it’s unclear whether the smartphone’s display will have a waterdrop notch or a punch hole for the selfie camera. But seeing how the Reno4’s already being marketed in Chinese stores, it shouldn’t be too long before the smartphone is officially unveiled.