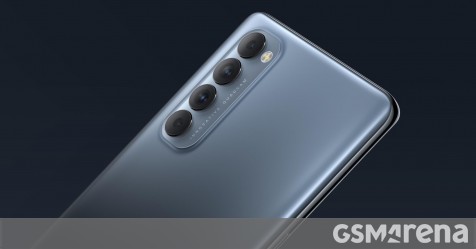 The fourth generation of Oppo’s mid-range Reno series is going global, though with some alterations. The Oppo Reno4 Pro increases performance across the board compared to its predecessor, the Reno3 Pro, with better performing chipset, screen, camera and battery. Don’t get it mixed up with the Chinese Reno4 Pro though, as there are some major differences, which we’ll get to in a second.

To give you the short version, the global Reno4 Pro has a bright 90Hz AMOLED display, a Snapdragon 720G chipset, 48MP main camera and 65W fast charging. Now let’s dive into the details.

The 6.5” E3 Super AMOLED panel has 1,080 x 2,400 px resolution. It runs at a 90Hz refresh rate and 180Hz touch sampling rate and it is super bright – it peaks at 1,100 nits. There’s a fingerprint reader built into the display. The phone is certified to stream 1080p content from Netflix and supports Dolby Atmos to boot.

In terms of design, the sides of the display are curved to 55.9°. This gives the impressions of thin side bezels and helps achieve a 92% screen to body ratio. The whole phone isn’t small (it has a 6.5” screen after all), but it is slender – it measures 7.7mm thick and weighs 161g.

The quad camera on the back is a major departure from both the Reno3 Pro and the Chinese version of the Reno4 Pro. The 2x telephoto camera is gone, instead there’s a 2MP B&W module to bring the count up to four.

Also, the main camera uses a 48MP 1/2” sensor (IMX586) while the Reno3 Pro had a larger 64 MP 1/1.72” sensor. Anyway, both the rear camera and the 32 MP selfie camera have dedicated Night modes, electronic video stabilization as well as some creative portrait modes.

The rear cam can take photos in inky darkness, even at 1 lux ambient light. For videos, it features Ultra Steady Video stabilization, but if you need a wider view, the ultra wide cam also offers an Ultra Steady mode. That camera has an 8MP sensor, by the way. The fourth and final camera on the back is the 2MP macro cam.

The Snapdragon 720G will perhaps be the most talked-about spec on the Reno4 Pro (and not necessarily in a good way). For what it’s worth, Oppo says that compared to the Helio P95 that powered the Reno3 Pro, the 8nm Qualcomm chip has 46% higher single-core and 22% higher multi-core performance (based on Geekbench scores), the GPU is 40% faster to boot (GFXBench Manhattan).

That said, it’s not as powerful as the Snapdragon 765G found inside the Chinese Reno4 Pro. Some European “Reno3 Pro” models are also based on the S765G (though those get a different, slightly worse camera setup than the Helio-based models).

The chipset is paired with 8GB of RAM and either 128GB or 256GB of storage. The company designed a new cooling system that combines a graphite tube, a graphite sheet and copper foil.

The phone is powered by a 4,000 mAh battery, which supports SuperVOOC 2.0. This allows it to charge at up to 65W, achieving a full charge in just 36 minutes. A more practical example is that 5 minutes of charging are enough for you to watch four straight hours of YouTube videos.

Oppo points out that the system is safe (and TUV certified that it is) with a multi-layer protection setup. Every component – power brick, cable, phone and even the battery itself – monitors the situation and if anything goes wrong, the power is cut immediately.

The global Oppo Reno4 Pro will launch in two colors – Starry Night and Silky White – both with a matte finish that wards off fingerprints and reduces glare.