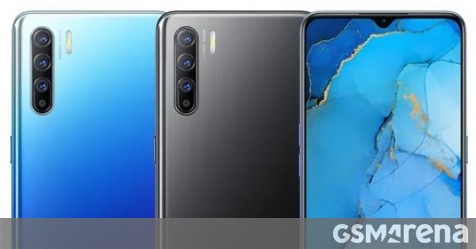 Oppo unveiled the Reno3 and Reno3 Pro 5G in China last December and earlier this month, the company announced the international version of the Reno3 Pro with a Helio P95 SoC and upgraded cameras. Now we hear Oppo will unveil the global version of the vanilla Reno3 as well, and we got an early glimpse of it thanks to leaked specs and images.

The international variant of the Reno3 looks similar to its Chinese counterpart – a waterdrop notch display with a quad camera setup on the back. But upon closer inspection, you can notice that the global version has a dual-LED flash on the rear joined by the text reading “Hybrid Zoom”.

Talking about the specs, the Reno3 international model will be powered by the Helio P90 SoC paired with 8GB RAM. It will sport a 6.44″ FHD+ display with a fingerprint reader underneath for biometric authentication.

The global Reno3 will have a 44MP camera on the front, which is an upgrade from the 32MP shooter on the Chinese variant. But the main camera is downgraded from 64MP to 48MP, which is joined by a 13MP telephoto, 8MP ultrawide and 2MP monochrome units.

The Reno3 Pro will pack a 4,025 mAh battery and arrive in three colors – Sky White, Midnight Black, and Aurora Blue.

There’s no word from Oppo about the international Reno3 yet but we expect to hear more about it in the coming weeks.