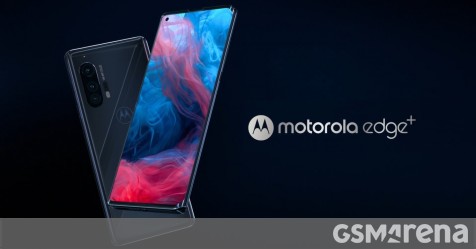 Motorola is set to unveil two new smartphones, dubbed Edge and Edge+, later today through an online event that will start at 11 AM CDT (4 PM UTC). The company hasn’t officially revealed anything about these smartphones yet, but we’ve heard plenty of rumors and now a last minute leak reveals the full specs and price of the Plus variant.

The Motorola Edge+ is powered by the Snapdragon 865 SoC and has 12GB RAM and 256GB UFS 3.0 storage onboard. It runs Android 10 out of the box and will receive only one major Android version update, which is a bummer.

The Edge+ sports a 6.7″ FullHD+ 90Hz OLED punch hole display with curved edges and packs a 5,000 mAh battery supporting 18W wired and 15W wireless charging. The smartphone also comes with 5W reverse wireless charging so you can use it to juice up other devices.

In terms of imaging, the Edge+ features a 108MP main camera which is joined by 16MP ultrawide and 8MP telephoto modules. For selfies and video calls, there’s a 25MP unit on the front.

The Motorola Edge+ will support 5G networks, cost $1,000, and will be sold exclusively through Verizon.

Meanwhile a promo video of the Edge+ shared by reliable leakster Evan Blass confirms the smartphone will also feature stereo speakers and an in-display fingerprint scanner. You can watch the clip below.

Blass also shared a promo video of the vanilla Edge, which confirms the smartphone will pack a 90Hz curved edge display with a fingerprint reader underneath and a punch hole in the top-left corner for the 25MP selfie camera.

The Motorola Edge, like the Plus variant, comes with stereo speakers and a triple camera setup on the back, but the 108MP primary camera is replaced with a 64MP unit.

The Motorola Edge will also support 5G networks, and while the clip doesn’t reveal its battery size, Motorola claims the cell will up to two days of endurance. The video is attached below.