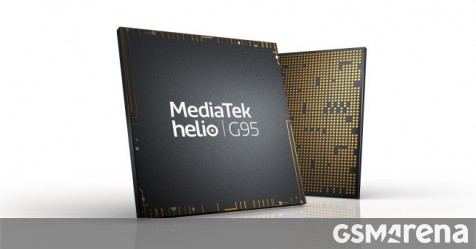 Over a year ago, MediaTek announced its G90 series gaming chipsets with the G90 and G90T. Now the company is unveiling the line’s new top dog called G95 – an overclocked version of the G90T with 5% better GPU performance. It still only supports 4G connectivity and has the same CPU layout, RAM and connectivity as the Helio G90T.

The G95 is fabricated on TSMC’s 12nm process and comes with two Cortex-A76 cores clocked at 2.05GHz alongside six Cortex-A55 cores working at 2.0GHz. The Mali G76 MC4 GPU is now clocked at 900MHz which provides the aforementioned performance boost. In terms of memory, we’re looking at up to 10GB LPDDR4x RAM while storage taps out at UFS 2.1 speeds.

The new G95 supports FHD+ panels of up to 90Hz refresh rate as well as up to 64MP camera sensors and 4K 30FPS video recordings. In terms of connectivity, we’re looking at Dual 4G VoLTE, Wi-Fi 5 and Bluetooth 5.0. There’s also support for Wi-Fi and LTE concurrency as well as GPS, Glonass, Beidou and Galileo GNSS.

The Helio G95 is expected to debut on the Realme 7 series which is due to launch on September 3. We’ll also see it on more midrange gaming phones in the coming months.