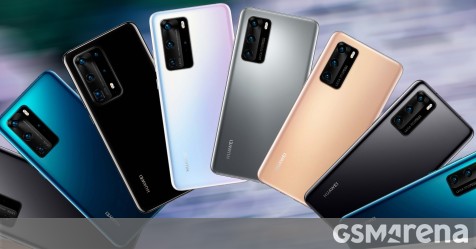 Here’s Huawei’s upcoming P40 lineup in one single image. It features all the available colors of the upcoming flagship lineup, which will consist of the Huawei P40, the Huawei P40 Pro and the P40 Pro Premium – the P40 lite and P40 lite E are already official.

The Huawei P40 Pro Premium is rumored to use ceramic instead of glass and it looks like it will come in either Black or White.

The Huawei P40 and P40 Pro will come in Silver, Grey, Orange (or Gold), Black, Blue and Aurora. We’re sure Huawei will come up with names, better suited to a promo like Breathing Crystal.