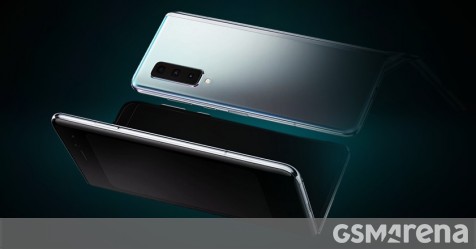 ETNews has published a small infographic that shows the design of the Samsung Galaxy Fold 2 and also looks at some of the upcoming competition.

The new Fold will have larger displays, both inside and out. The internal screen will grow to 7.7 (up from 7.3) and will reportedly adopt the 120 Hz refresh rate of the S20 phones as well as the S Pen stylus of the Note series. The stylus support isnt certain, however, as rumors of technical difficulties cropped up yesterday.

Besides being larger, the internal display will use Ultra Thin Glass (aka UTG), coming from the same suppliers as the glass for the Z Flip. Based on the schematic, the wide notch of the original Fold may give way to more of a punch hole solution (though still quite wide).

The external display is set to grow as well, from the smallish 4.6 of the original to 6.23  that gets close to the main (only) displays on non-foldable phones, though it will have a very tall aspect ratio once again. Still, it will make the Galaxy Fold 2 much more usable when closed. This screen will be covered by the regular kind of glass and will have a 60 Hz refresh rate.

The bottom half of the infographic shows predictions of where the foldable market is going. On the left are total number of units sold (in millions). ET is reporting that Samsung is aiming to build 300,000 units a month with an expectation to sell 3 million units in a year (so the majority of the 5 million total sales of foldable phones that analysts are forecasting for this year).

On the right are predictions of what the competition will do. The Huawei Mate X 2 will fold inwards and will also pack a stylus, Motorola will introduce a 5G version of the Razr, Xiaomi is also working on a clamshell-style folder (like the Razr and Z Flip). TCL is working on both inward and outward folding devices, ZTE will focus on more affordable foldables. Those are the predictions, anyway.

Samsung will make the Galaxy Fold 2 official on August 5 at the Unpacked event, alongside the Galaxy Note20. The Galaxy Z Flip 5G will join them.