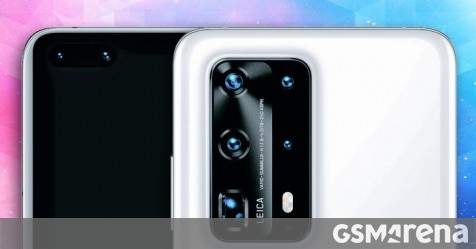 Leakster @RODENT950 is back with more info on the Huawei P40 Pro camera. The main module on the back will reportedly feature a Sony IMX700 Hexadeca Bayer sensor. Thats Greek for sixteen, which likely refers to the Quad Quad Bayer sensor we heard about in January (it reportedly does two rounds of 4-in-1 pixel binning).

Its a large 1/1.28 sensor with 52MP resolution. That results in 13MP shots after one round of binning and just 3.25MP after two rounds (likely reserved for Night mode). Despite the Bayer name, the sensor is actually set to have a RYYB color filter instead of the usual RGGB.

The ultra wide cine camera will also feature a fairly large sensor, this one 1/1.5 Sony IMX650 with 40MP resolution (and an RGGB filter).

Most interesting of all is the combination of two zoom cameras  a periscope with 10x optical zoom and a regular telephoto camera with 3x magnification.

The upcoming Huawei flagship will also feature a Time of Flight 3D sensor and color temperature sensor that will aid the camera modules on the back. All this sounds a lot like the Huawei P40 Pro Premium Edition that was rumored in early January, the regular P40 Pro was supposed to have a 5x periscope.

Huawei will officially unveil the P40 lineup on March 26, then we’ll find out the actual product line-up. Well, aside from the Huawei P40 lite and P40 lite E, those are already official (and are rebranded versions of existing devices).