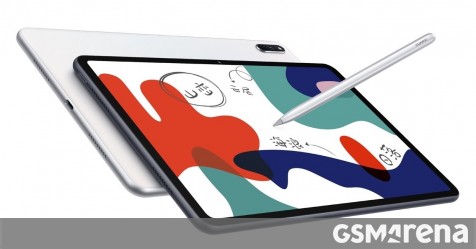 The Huawei MatePad 10.4 that surfaced last week has been listed on a couple of Chinese e-commerce websites, which reveal the tablet will be announced on April 23 – the same day Huawei’s nova 7 lineup arrives.

The MatePad 10.4 will have Wi-Fi and LTE versions, with the former arriving in 4GB/64GB and 6GB/128GB models and the latter having a single 6GB/128GB configuration.

The images of the MatePad 10.4 included in the listings give us our clearest look at the tablet yet. The MatePad 10.4 will come with a stylus and you can see its power button is located on the top while the USB-C port is located at the bottom. The back of tablet also has “Sound By Harmon Kardon” written, confirming audio enhacements.

The MatePad 10.4 will come with two cameras – one each on the front and back. Both are said to have 8MP sensors.