Huawei Mate X2 to come with an inward folding display 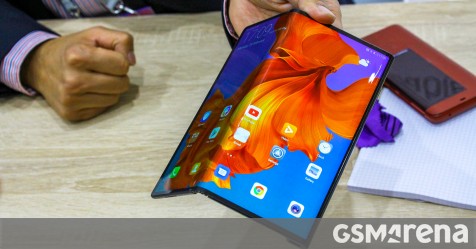 Word comes from Ross Young, who’s the Founder and Lead Analyst of DisplaySearch and DSCC. In reply to a tweet by reliable leakster Evan Blass, Young claimed that Mate X2 will have an inward folding display, which will be sourced from Samsung and BOE. And it won’t be the UTG type, but CPI instead.

This isn’t the first time we are hearing of a foldable smartphone from Huawei with an inward folding display, since the Chinese tech giant filed a patent with the European Union Intellectual Property Office (EUIPO) for this design back in January.

The sketches provided by Huawei to EUIPO revealed the foldable smartphone will have a slot for a stylus, and it will come with a total of six cameras – four at the back and two on the front, housed on the vertical sidebar, which is also home to the secondary display. You can check out the images below to get a better idea of the design.

Circling back to Blass’ tweet, the leakster revealed the names of Huawei’s upcoming products along with their codenames in his post. The Mate X2 is Teton while the next-gen Nova and the Y9a are Jessica/Barbie and Franklin, respectively.

There are wearables as well. The Freebuds Pro are codenamed Mermaid while the Watch Fit is called Stia.