Flashback: Nokia 9000 Communicator could receive fax and browse the web 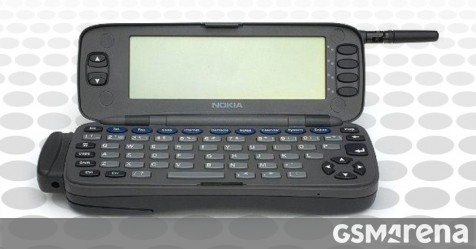 Imagine it’s 1996. This newfangled “Internet” thing is catching on, allowing people to send “e-mails” and explore the “World Wide Web” from their computers. Meanwhile, the growing GSM networks allow millions to make and receive calls outside their home and office.

One device was at the intersection of those two growing trends and was one of the earliest devices that we may describe today as a smartphone. This is the story of the Nokia 9000 Communicator.

Of course, back then it wouldn’t have been called a “smartphone”. Instead it may have been described as a “palmtop PC”. Not really a “pocket” PC, though, this thing was huge – it weighed almost 400g/0.9lbs.

But it was definitely a PC, it ran a DOS-based operating system on an Intel 386. This CPU was first introduced back in 1985 and brought the x86 architecture into the 32-bit era. While over a decade old by the time the Communicator arrived, it was still quite impressive to see it go at 24 MHz while on battery power.

Not that the software made use of the 32-bit capability. PEN/GEOS 3.0 was based on the 16-bit GEOS – an early operating system with a graphical interface that did its best to look like Windows 95 when running on a computer.

While running on the Nokia 9000 Communicator, however, it used a completely different UI. In no small part this was because it was limited by the 640 x 200 px LCD, which could only display grayscale.

The phone had a laptop-like design with the large display and the QWERTY keyboard on the inside. On the outside was a small screen and a keypad – this was the phone part of the device. The earpiece and mouthpiece were on the “back”, so you would talk with the screen and keypad facing away from you.

Interestingly, the two halves were pretty separate from one another. You could power the phone on and off without affecting the “PC” half. They did have a connection between them, though, allowing you to type an SMS or edit contact information using the keyboard.

You could also sync your contacts and calendar with your computer. This was done in a particularly wonky way – it was the 90s, okay? First, the PC software came on a 3.5” diskette (remember those?).

There was also an Infrared port, which could be used for syncing or for printing documents wirelessly. It would be a while before phones got Bluetooth, never mind Wi-Fi.

But you didn’t need a computer to perform many daily tasks, that was the whole point. You could easily reply to an email you received while away from the office. You could even receive fax – that was still in heavy use by businesses back then.

Actually reading a fax on the screen was tricky, however

Internet and fax were transmitted over a painfully slow 9,600 bis per second CSD connection. Receiving a single page would take over 40 seconds. You could also surf the early Internet thanks to the pre-installed browser (which was an equally slow experience).

The World Wide Web was much simpler back then

Unfortunately, GeoWrite, the GEOS document editor, was not available on the Communicator. There was only a simple note taking app. Which was probably fine, the QWERTY keyboard certainly made text input easier than phone keypads of the day, but we still wouldn’t want to type out a full page of text on that thing.

The calculator was pretty neat, though

A couple of years later the Finns introduced the much-improved Nokia 9110 Communicator. It was much lighter at “only” 253g/0.55lbs and the external antenna could be folded into the body. Even better, the silly adapter was removed, allowing you to plug cables directly into the phone. The CPU was upgraded to an AMD-made 486 CPU running at 33 MHz. 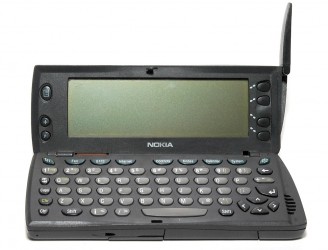 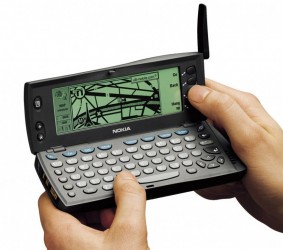 This model also added an MMC card to expand the limited onboard storage – both this and the original Communicator had 8 MB of built-in memory in total, of which 2 MB was reserved for your data.

The next model would make the switch to Symbian, which remained the OS of choice all the way until the last Communicator (in spirit if not in name), the Nokia N97.