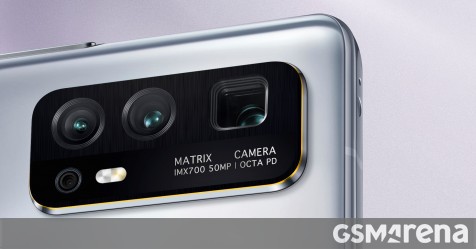 The Honor 30 arriving on April 15 was rumored to pack a 50MP Sony IMX7xx sensor. That rumor has turned out to be true now as we’ve got an image of the Honor 30, which confirms its 50MP Sony IMX700-based camera.

While details about the IMX700 are still scarce, our source tells us that it will be the industry’s largest Sony custom sensor. That would presumably mean that it will match the Huawei P40 lineup’s 1/1.28″ sensor, even if they are clearly different units as the P40 has 52MP sensors.

The picture also confirms that the 50MP primary camera will be joined by three more shooters, with one of them being a periscope module. These cameras are housed inside a rectangular setup, which is also home to the dual-LED flash.

Besides, you can see the camera module has a golden accent, and there’s also text which confirms the Honor 30 will feature Octa PD.

Other things we can glean from the image are the secondary microphone at the top accompanied by what could be an IR Blaster or the 3.5mm headphone jack. While the Honor 20 had no audio jack, the aperture looks rather big so it looks likely that it’s making a return here.

We can also see the antenna lines on the top frame, meaning the Honor 30 has a metal frame.

Furthermore, there’s a button on the right side of the Honor 30. This could be the volume rocker with the power key placed underneath, since the left side of the phone looks clean – something we already saw from a previously shared official image.

With the official unveiling around two weeks away, we are likely to hear more about about the Honor 30 and the Honor 30 Pro.